It's been quite awhile since wr last updated everyone in regaurds to our bus conversion..so this post will be all about what we have been doing.


Since ariving here in southern california a few months ago, Moss and I have been living in the bus and working feverishly to earn enough money for our solar pannel system. When not working we spent a good deal of time living off and on at a campground on the beach. We also have been helping Moss's mom and dad fix up their house and get ready to move to Washington.


Then finally, just yesterday, we were able to save enough to order two 125 watt pannels from RV Solar Electric in Az. Along with the pannels we gotall the wiring, charge controler/system monitor and mounting hardware, for whooping 1,440 dollars, with shipping !


It should arrive at a relatives address in california in a week or so,at which point Moss and I will get really excited,jump up and down..then spend the next three days screaming and hollering as we try to figure out how to put it in...


Actually,I understand it's fairly simple to install..I guess we'll find out soon enough. This is great news as it means that finally we can begin to finish some of the woodworking stuff that we have had to put off due to the unavailability of electricity.


We plan on working until January, then find a nice boondocking place to stay for a month or two while we finish up the bus...a la solar electricity.


As a back up power source we will be making or purchasing a pedal powered bicyle generator for cloudy days. We hook it up to our bike tires and the battery bank,then take turns pedaling to power up the batteries !


Another great energy efficient item we bought over the last few months has been our Nova Kool refrigerator. This is one of the most eficient refrigerators available and I highly recomend it. It comes in many sizes, ours is a small 3.5 cubic model with freezer that normaly draws only 2.5 amps an hour..and it only runs part of the day. With the insulation we glued on the sides we reduced the amp draw even more (1.5 - 2 ?)


There is another company, Sun Frost that makes almost the same model but charges over 1000 dollars as compared to ours which only cost 650 ! The only difference is the sun frost has extra thick insulated walls..but if you just glue the insulation to the Nova Kool model you get almost the same efficiency as the more expensive Sun Frost !


Aside from all that, Moss has been working on our veggie oil system. I will turn it over to him for the details now, but first a few photos from the beach..
Posted by Unknown at 11:33 PM No comments: 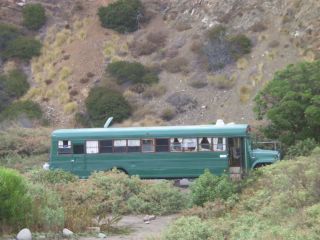 At the Campground on the beach.
Posted by Unknown at 11:32 PM No comments: 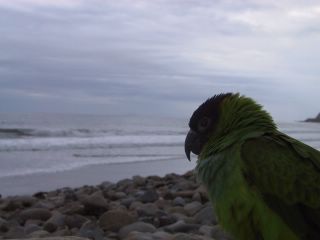 Joseph in one of his pensive moods..
Posted by Unknown at 11:30 PM No comments: 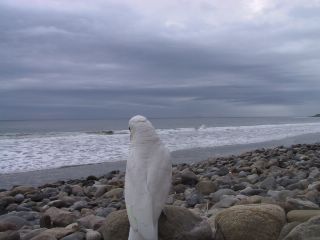 Casper takes some time to enjoy the view...
Posted by Unknown at 11:29 PM No comments:

Howdy, Moss here with another veggie oil bus update. This truly has been a learning experience and always a work in progress.


That said there were a few problems that plauged our original system..


First problem is that because of the multitude of brass fittings ( used to make the different send and return lines fit together with the manual shut-of valves) we had many more instances to let in air. Air is the bain of diesel engines. To much air can stall the bus dead.


Second issue ( this should have been a no brainer in the first place ..) was that when we wanted to switch over to veggie oil from diesel or vice a verse, we had to pull over, get out of the bus, open the hood and swich over the four shut off valves. That was kinda a pain in the boody. Needless to say, this was one of the first things to change.


So what did we do to rectify these situations?


Really simple.I replaced all the manual shut-off valves with a Pollack six port silinoid valve. All the lines go in to the little black gizmo and can then be switched from the diesel/biodiesel tank to the veggie oil tank with one convenient switch, located with all the other switches near the driver area.We also replaced some broken copper pipe going to the veggie filter with flexible rubber hose.


We have had hardly any trouble with air since we have modified the system.The only time we do is when I change filters. Because of the switch,however, I can now purge the veggie line of air by swiching back and forth between the two tanks and letting little bits of air in at a time. This allows the diesel side to take care of the small air pockets I let in.


The next major changes we will be making is replaceing our 55 gallon veggie tank/barrel with a flat, stainless steel 85 gallon metal tank with a heater inside.


Besides that the only other thing to do will be to replace our Goldenrod filter with a heated Raycor jet filter.


After that our veggie conversion will be complete.In the meantime, everything is working very well, with few if any problems.These little extras will just help us in cold weather and with clearance issues for the tank.


Thats all for now...we'll be shure to post an update when our pannels come in. ~Moss
Posted by Unknown at 11:19 PM No comments: 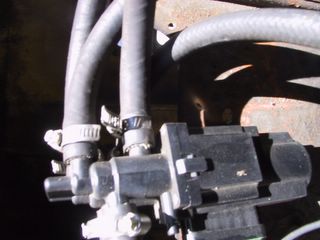 Pollack Solenoid Valve. Note the new black rubber tubes replacing the soft copper ones.
Posted by Unknown at 11:18 AM No comments: