The solar pannels are in and functioning! Our system consits of two 125 watt pannels, a volt meter/charge controler and two 12 volt deep cycle batteries. Future plans call for an indoor, under bench battery box that will hold two more batteries,and the possibility of an additional pannel.

So far we seem to have enough power for everything we need. Here is a run down of our appliances and use..

A 3.5 cubic foot nova kool refrriderator/freezer (on the number three setting).This is one of those ultra efficient refrigerators with a danfross compressor, a bit on the expensive side, but highly recomended and worth every penny),it draws 2.5 amps an hour but is only on half the time,depending on outside temp. We listen to our XM satellite radio from around 9 am to 10 pm, and often a few music c.d's as well. In the evening we may also watch a dvd or two. For lighting we use candles and firelight almost exsclusively ( though we do have the option of electric lights if needed).

With all that, and being in southern california in winter, we have not gone below 12.5 volts on the meter.The real test will be later next month though when we plan on finding a nice boondocking place to stay for a bit while we finish up some cabinentry, and start on the water sytstem. We will be useing lots of power tools, which draw an enormous amount I am shure. With no back up generator, we may run into problems.

On a different note...we had a lovely solstice/Yule! We went to the Santa Monica Mountains on the 21 of dec to make note of the solstice, the shortest day of the year..and the begining of the lengthening of daylight. One of my favorite times of year and favorite holiday. We exchanged gifts on dec 25 with family ( funny because they are all atheist jews and he and I follow a more earthy, pagan path..). Moss suprised me with a brand new simerman dulcimer. I have been playing the mountain dulcimer off and on for the last twelve years or so. The one I had previously was badly damaged by the cold and damp when we lived in the tipi for all those years.

This new one is the best sounding, most beautifuly crafted dulcimer I have ever heard or seen. It sings and plays like a dream ! There are two hummingbirds for soundoles, and this is quite apropo as I love birds and used to rehab wild hummingbirds, as well as other songbirds. The symbol is very signifigant and inspiring to me.

I suprised Moss with a banj- mo. This is a cross between a dulcimer and a banjo. Unfortunately, the man will not be finished makeing it until mid January. We look forward to creating and recording songs together as the two insturments are very compatible.For my little niece Winter, I made one of my wool sculptures. She seemed to like it quite a lot and I had much fun makeing it.

In late January we set out to find a nice boondocking place,probably in the southwest somewhere, until then we are here in southern c.a helping family move and work on their house. Following are pics of our solar pannels and a few others as well...
Posted by Unknown at 12:50 PM No comments: 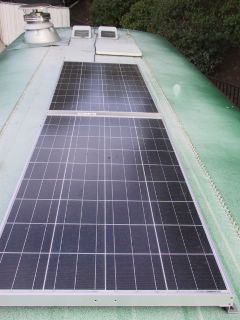 Solar pannels installed on bus roof
Posted by Unknown at 12:02 PM No comments: 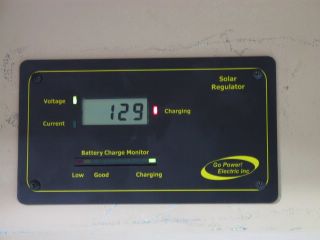 Volt Meter/Charge controler for solar pannels.
Posted by Unknown at 12:01 PM No comments: 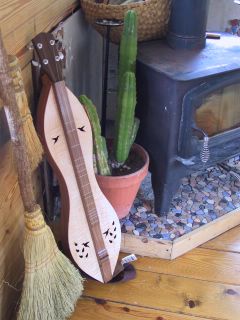 My new simerman dulcimer ~ a gift from Moss
Posted by Unknown at 12:00 PM No comments: 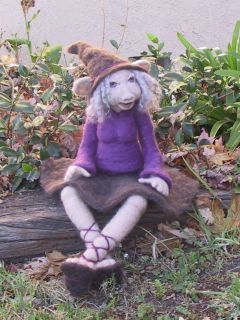 A wool sculpture I made for my niece, Winter, for the Yule holiday.
Posted by Unknown at 11:58 AM No comments: