Our original plan of going to a nice boondock location and working on the bus has been scrapped temporarily. Instead we will be doing some initiative work in the state of california, northern and southern. This is good as it means money for us, money to finish the bus especially. Curently we have been going between helping Moss's parents fix their house to sell, camping out at various campgrounds and working and saveing money.

Being as this is the first month of the new year..I figure it is the apropriate time to re visit, and perhaps, redefine our original goals.

It seems like years since we left Washington state for Florida, where we did much of the work on our house bus. In reality it has been just a little over a year! Since ariving in ca in May, things have been going quite slow as much of our focus has been on working and makeing the money to complete the project.

Those of you who have read from the beginning may have wondered about the phase two of our plan. You know....the naive and idealistic part about how we are able to make a meaningful living, traveling the country selling our art and music at fairs and festivals.

Unfortunately, that part is not as straight forward as building the bus is, and until the bus is complete it is hard to focus on phase two. In the meantime, we have kept our day jobs gathering signatures on various state initiatives that we support. It is a good job that pays either by the hour or by the sig, though work is seasonal and highly unpredictable, at best. The greatest difficulty is finding good initiatives that we can truly support and can get behind. Often, the initiatives are very conservative or just plain obnoxious, and if we dont support it, we dont work it..no matter what the pay. For this reason we often find ourselves haveing to pass up work.

We are planning on scheduling a few shows this year where I will go in as a roving vendor with a few wool sculptures, some handspun yarn and some felt boots. Because the sculptures take so long to make it is doubtful that I will have enough to fill a booth, so the roving vendor may be the best bet for me.

Moss is still putting together his solar powered, mobile recording studio and is working on a live show for festivals. Since most of the music on his c.d, Songs From the Electric Greenwood, is made by himself, playing the insturments then recording them as tracks, a live show has proven to be a complicated endevour. A live show however IS an essential ingredient if we want the music to truly get out there and be heard by the masess.

The mobile recording studio that he is putting together consits of a laptop with numerous professional audio recording programs, a small keyboard/midi controler, a firewire audio interface with preamps, a condensor microphone, a stero microphone and 4 portable solar pannels /battery pack to power everything. With this set up he can take all his recording equipment and insturments and walk off into the woods, canyons, meadows or mountains to record and write his new c.d. The idea is to capture the spirit and energy of the beautiful, wild places that we visit, a sort of "sounprint" of the enviroment. Plans are also in the works for a c.d of just the two of us, myself on mountain dulcimer and he on banj mo ( a combination of a banjo and a mountain dulcimer ).

Speaking of the dulcimer, I am so enjoying becomeing re aquainted with this insturment. I have played off and on for many years now. Although other intrests and endevours pulled me in different directions for awhile..I always knew I would come back to the dulcimer when the time was right, and that time is now. What a joy ! What a simple, intuitive and forgiving insturment! I encourage those of you who feel they could never play an insturment to try a mountain dulcimer.

As for the bus, we have finally been able to get some more cabinets built in the kitchen and we painted some more brown around the windows. On the ninth we will be taking a week off to do some more interior wood work and maybe finally install the water system.The shorterm plan is to work hard until late spring, working on the bus whenever possible. By then we hope to have saved enough money to complete the bus and get us through the rest of the year, along with the few shows we will be doing when possible.

Meanwhile, we continue to meander about southern California, working hard, seeking out the quiet wild places on the outskirts of the cities, at every oportunity....
Posted by Unknown at 12:04 PM 27 comments: 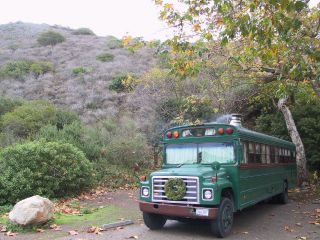 Camped out at a california state park..
Posted by Unknown at 12:06 PM No comments: 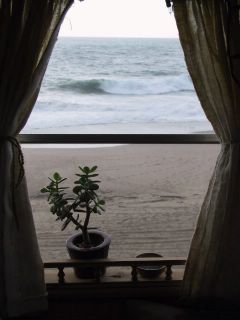 Camped on the beach..the view from our window..
Posted by Unknown at 12:05 PM No comments: 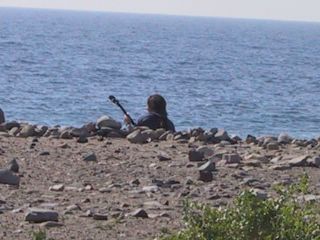 Moss serenading the ocean with his banjo.
Posted by Unknown at 12:04 PM No comments: