Well, we finally finished with the Eckerds job for Joe. It took a lot longer than anyone excpected ( everything always does), but the extra money is definitely a blessing right now.


We did manage to get a lot done on the bus though, despite all our other work ,and I finally have some pics to post.Moss has completed one bird cage and is now working on the secound one. The bench is complete except for some cushions ( I need to find a nice fabric) and arm rests.


For for the arm rests we are thinking we would like to use pieces of sanded and varnished, twisty oak brances.The bottom part of the bench,going down to the floor will be hard pine tounge and groove wood.

The woodstove is IN and functional, and just in time ! Last night was 28 degrees here in Weeki Wachee !

For the hearth we built a raised platform and two heat walls on either side. They are made of cement board on 1 " spacers. This creates an air space and protects the wall from over heating and causing a fire. In addition I am creating a tile mosaic out of broken tile bits from a local flooring place.This will further help in reducing heat transfer to the back wall.The stove is bolted on all four legs through two two by fours and out through the bottom of the bus.

The stove pipe is single walled up to the roof, then we installed a double walled/insulated roof jack where it meets the roof and an extra foot of double insulated stove pipe on the outside. That double wall is expensive at one hundred bucks a foot ! It was a very important step though, as our ceiling, when we are done will be made of tounge and groove pine wood and we want to make shure we dont burn up !

We are really trying to do things right and be as safe as possible here.
Carbon Monoxide poisoning is another concern and you better believe we will be installing a CO monitor and propane detector.

With the bird cages almost complete we were finally able to move our bed into the back of the bus and out of the van .Last night was our first night sleeping in the bus. We started up the woodstove and it was quite cozy. The draw was fine , as was the venting.

With the bed in the back, and the living room and bird cages in, at least everything is in its place and dare I say, things are beginning to feel a tad bit homey around here.

Now we just need to build the kitchen, woodbox,toilet, bathtub, bedroom, install tounge and groove floor,insulate ceiling and cover with tounge and groove, do the fresh and black water sytems, all the numerous cabinets and bookshelves, do the veggie oil engine conversion, propane and electric systems, paint the bus and install window screens and curtains on all windows.

WE HAVE KNOW IDEA WHAT WE ARE DOING ! !

Every project must be resecrched and consulted on before hand. This, obviously adds a lot of time, and might I add, pressure.

We'll just keep breathing deeply,taking it one step at a time, and try not to look at the big picture..........
Posted by Unknown at 4:00 PM No comments: 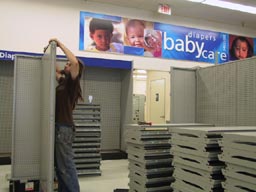 Moss disasembles a shelving unit at Eckards.
Posted by Unknown at 3:57 PM No comments: 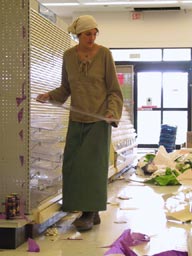 Me working at takeing down a greetin card display at Eckards.
Posted by Unknown at 3:57 PM No comments: 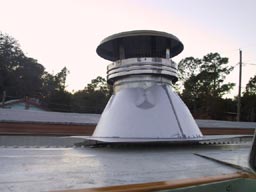 Our stove cap,pipe and flashing from above.The stove flasing needs to be screwed down yet in this pic.It's not as huge as it looks.
Posted by Unknown at 3:56 PM No comments: 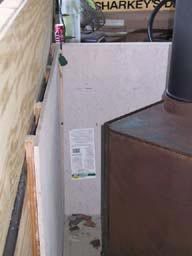 Here you can see how we did our heat wall.
Posted by Unknown at 3:54 PM No comments: 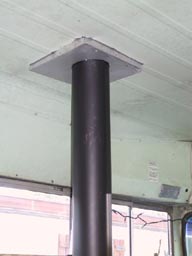 Here you can see where the double insulated Jack goes through the roof.
Posted by Unknown at 3:53 PM No comments: 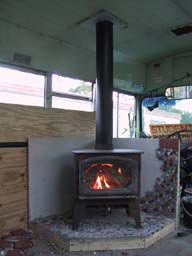 Our first night with a fire. In this photo you can kind of see the partially completed tile mosaic I am working on.

Posted by Unknown at 3:52 PM No comments: 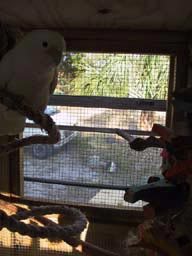 Casper approves of his new pad. Each bird cage ( there are two) has it's own screened window, as seen in this photo.There is a door over them as well,allowing me to put curtains on the other side and to open or close the window.

Posted by Unknown at 3:50 PM No comments: 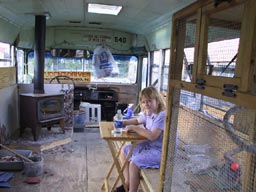 Our friend Lydia and our partially converted bus.
Posted by Unknown at 3:48 PM No comments:

All right, I can't stand it any longer. Moss and I have a confession to make.

We have been hanging out at the local American Legion on Fri nights ( Karaoke night ), and have now become regulars.

It all started rather innocently. Greg and Elaine, especially Greg, is really into karaoke. He goes every fri and sat. They were always , much to our dismay, asking us to go with. Greg drives one of the buses and everybody, Greg, Elaine, Lydia and sometimes Grandma and Grandpa, all jump in and head off to the Legion.

Finally,one night we agreed. We actually had a great time, and before we knew it one night turned into a weekly thing and we are now regulars on American Legion karaoke Nights.

At first, Moss and I definitely felt out of place. Nearly everyone is over 60 and republican. We got some very disaproving looks at first, with Moss's strange hair and me with a ring in my nose, we certainly stood out, but we didn't let that bother us one bit.

Moss really broke the ice and shook the house, so to speak,when he took to the dance floor for the Bee Gees, Staying Alive. Many folks stopped just to watch him.

For those of you who know Moss and have seen him dance you know why. Moss is an exceptional dancer. I mean, really,really good, and it is hard for anyone not to watch him when he is dancing.

After he was done the announcer complimented him and people were comming up left and right high fiveing him.


One ole' gal gave me a nudge and a wink and commented , " He really got these ole fuddy's moveing in here, eh ? "

Folks were talking about that for weeks.

The biggest star at the Legion though by far, has got to be Fitz.

I swear this guy must have had a gig in Vegas at one time. He is one Cool cat. Cool like in a early Vegas, Rat pack kind of a way.

When Fitz arrives the announer states, "Ladies and Gentleman, Fitz has just entered the building" and everyone cheers.

When he gets up to do "His " song Frank Sinatras, My Way, the crowd goes wild. Everyone cheers and all the old ladies wave their hankies in the air. He struts around the place, in and out of the tables singing and dancing at the ladies. Everyone has a great time.

He is quite a character,and has the distinct honour of being the oldest legion member at 95 years old.

Lydia enjoys the legion as well, though by law she has to leave by 9:00 . She is an excellent dancer, and is always practicing at home. She says she wants to be a movie star and a dancer when she grows up. I believe she will be.

Yes, it's not a place we would usually hang out, and yes, it IS heavily conservative, but we do have a good time when we go. We try to look at everything as a new opportunity to experience something totally different.

After all, isnt that what travel is all about, isn't that kind of what were doing ?? Isn't that what life is about ??

Sighning off from rural Weeki Wachee Fl ~ Pix
Posted by Unknown at 9:52 AM No comments: 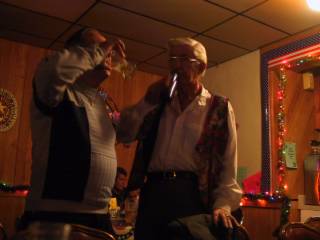 Fitz enjoys a smoke and a beer with a friend.

Posted by Unknown at 8:29 AM No comments: 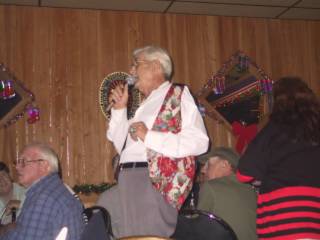 Posted by Unknown at 8:28 AM No comments: 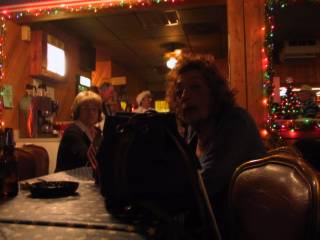 Posted by Unknown at 8:27 AM No comments: 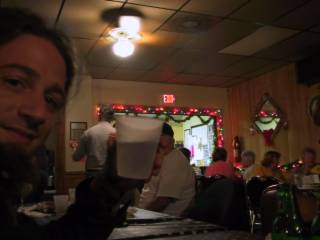 Moss parties hard at the Legion.

Posted by Unknown at 8:24 AM No comments:

Howdy folks. It's been a few weeks since I have been able to write, and there is much to report.......

We have finished the wood stove heath, almost finished the bench and I am now working on the tile mosaic for the hearth, while Moss is starting on the bird cages. It is going much slower than we originally thought it would,we are now hoping, maybe, to be finished by Febuary. Greg has been real sick (he has Lupus) and has not been able to help us much lately,but we are figuring it all out just fine, so far..

The days are getting shorter and suprisingly cold for Florida. It is actually supposed to freeze tomorow. It is nice though, and makes sleeping in the van more comfortable than it was back in the balmy, mosquito infested nights of October (gosh, has it been that long ?).

We hope,within the next two weeks to be able to get the bird cages done and move our bed into the back of the bus. This way,we can sell the van.We already have a buyer for it for 1000.We would then have to drive the bus around town for errands and such,which could be a bit hectic. It will however,be running on FREE, CLEAN burning , RECYCLED veggie oil, ~ coutesy of the local American legion.

Originally we had hoped to purchase a car to tow behind, but our curent finaces no longer allows for that possibility, at this time.

We ran out of cash a week and a half ago.

All the money we had saved up for the bus conversion, about 5000, had dwindled down to about 200, with the bus only half completed.We needed some fast money and started looking for work.

There is a local health food store here in town that Moss and I had visited several times.The owner, Joe, is a great guy and we chatted with him whenever we went in.

Maybe he needed sales help ? It was worth a shot.

On our next trip ,we were standing in line,waiting to check out and preparing to inquire about work. It was then that Joe aproached us and asked if we needed some work, as he had some garden stuff that he really needed done, and he was to busy at the store.

How perfect! It is amazing how things have a way of just working out when we just live in the momment and follow our bliss.

Anyway, that was a week or so ago.We are now working on a new project for him. Joe is opening a co -op in downtown Brooksville, and has bought all the shelves from a local Excerds that has gone out of business. Our job is to take apart every shelf and isle way, stack all the pieces, put them on pallet boards and shrink wrap them.There must be over a 1000 shelves !

Moss and I have a key and work there during the days by ourselves, it is actually a lot of fun, and should take at least another three days.

So, it looks like we will have a good amount of work for the next few months, plus the thousand for the van.That should give us just enough to finish the bus and a little extra to live on while we are in the Keys making things to sell at art shows.

In the meantime,we'll keep chippin away on the bus, here in Brooksville Fla. 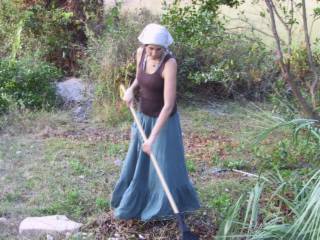 Me working in the Garden at Joe's. 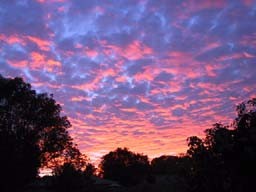 Moss and I are treated to a beautiful sunset at the end of a hard days work. 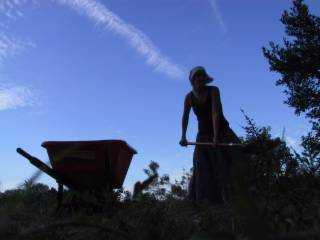 Shoveling rocks in the garden.

Posted by Unknown at 4:00 PM No comments: